It was a nail-biting, hard-fought battle. Thanks to so many who came out to watch this exciting round of soccer. Our Homer Hawks Team faced the Lemont Raiders and lost 3-0 in the first game. It was an eye-opener for the team. The boys had a 5 minute break before starting the 2nd game. It was really humid and the hot turf field was making things worse for all boys - Hawks and Raiders. At this point, whoever won the 2nd game would take the Cup. The teams were evenly matched and tied 0-0.

The tournament went into a shoot-out. Lemont's first shooter had a phenomenal shot on our goalie, Brian Moore who saved the goal. Mason Messina stepped up for the Hawks and shot a clean shot in. 1-0 Hawks. Lemont scored. Reid Fikejs stepped up to score easily. 2-1 Hawks. Lemont scored. Chase Hase popped a goal high in the left corner.
3-2 Hawks. Lemont scored. Ryan O'Callaghan who had fantastic play as sweeper in both games stepped up and hit a hard shot that the Lemont Goalie fumbled and then saved. 3-3. A Lemont striker shot wide and missed. 3-3. Jack Dilger took the 5th and final shot for the Homer Hawks and scored. 4-3 Hawks.
What an experience! And what an education for all. If the U13s had not performed as well as they did in the 1st and 2nd rounds of State Cup, they would not have been in the undefeated position they had earned. 1 loss in the Championship would have put them in 2nd place. But because of their strong wins early in the tournament, they received that second chance, capitalized on it, and came home with the trophy!
Congratulations to the U13 Boys Platinum Homer Hawks Soccer Team. You've made our Club proud!
The NISL/US CLUB STATE CUP CHAMPIONS for U13s - Homer Hawks Boys
Reid Fikejs
Dylan Hansan
Jack Dilger
Jack Wheeler
Jonathan Cruz
Kezie Nwachukwu
Jason Volkman
Mason Messina
Ryan O'Callaghan
Zeke DeYoung
Corry Williams
Chase Hase
Brian Moore
Gozie Nwachukwu
Eric Rivera 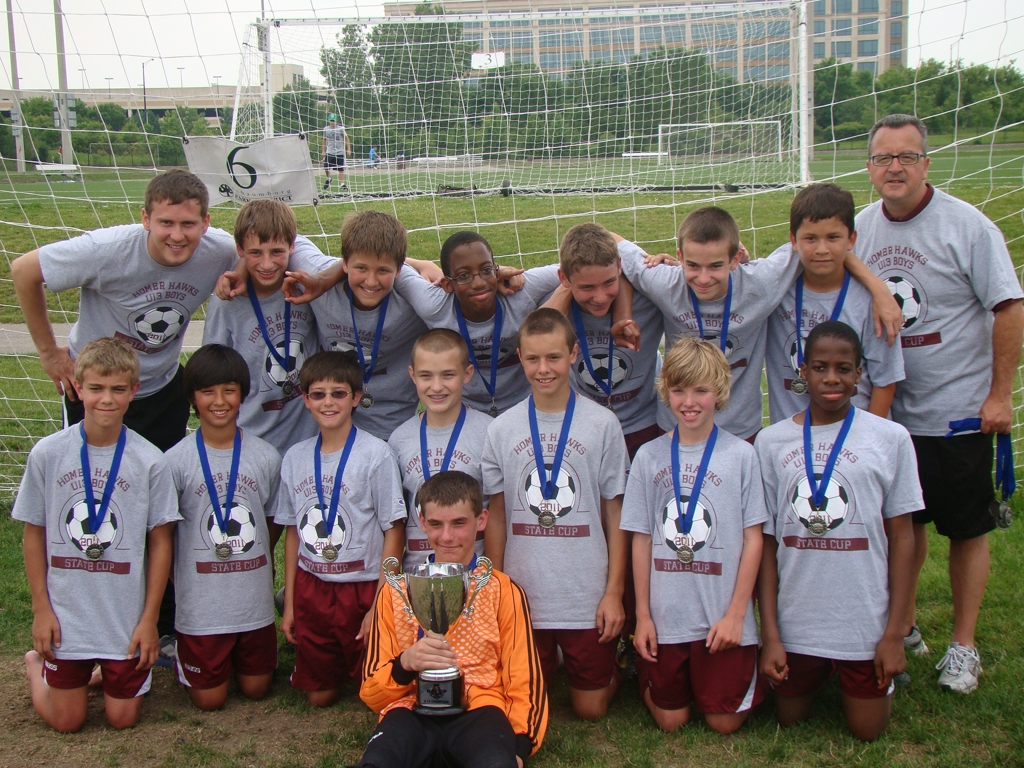