The U14 Classic Boys Soccer Team from Southwest Soccer Club have been earning many accolades recently.  They are the team who won the NISL State Cup in June.  Then they captured the championship title in

St. Charles at the TCSA tournament in August.  But their biggest feat so far occurred over Labor Day weekend in St. Louis where they won first place at the Gallagher Friendlies 6th Annual Soccer Tournament.

Soccer players from all over the Midwest and South compete in this 2-day tournament that courts the highest level teams for some pretty exciting soccer.  The SWSC U14 Classic Boys went undefeated in the tournament, winning all 4 games against some pretty tough competition.  This team scored a total of 16 goals and had only 3 goals scored upon them in all 4 games.  They faced the 7th, 11th & 17th ranked teams from Tennessee and beat them 1-0, 4-1 and 8-0.

In the final game, the SWSC U14 Boys faced the Kansas City Dragons who are ranked 2nd in the state of Kansas.  It made for some really great soccer.

In a very physical showing, the U14s from Southwest held onto a 3-2 lead to the very end.  Phenomenal defense was displayed by Brian Moore (goal keeper), Corry Williams (stopper), and Eric Rivera (left defender).  Offensive highlights included a goal from midfielder, Dylan Hansan, and 2 goals from forward, Jack Dilger.

When interviewed after the game, coach Alen Smjecanin stated, "I have had so many people from different states say 'your team is good!' They ask me where our team is from.  I tell them Homer Glen, Lockport, Orland Park, Shorewood, Crestwood…we're from all over.  These boys are the best talent from the southwest suburbs of Chicago."

The Southwest Soccer Club is the traveling division of the Homer Soccer Club which also runs a soccer recreational program and is affiliated with 14 different girls travel teams under the Chicago Inter name.  For more information, visit www.homersoccer.org or www.swsoccerclub.org 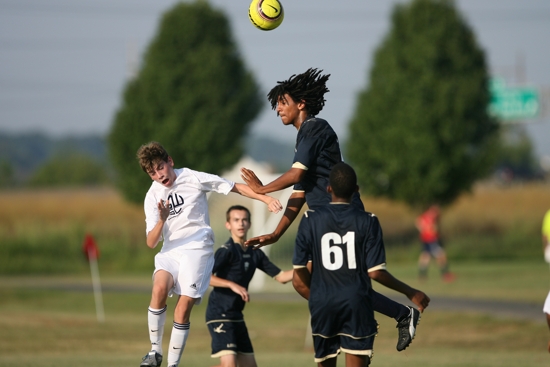 Corry Williams heads the ball in a tight defensive game as Kezie Nwachukwu and Jack Wheeler stand ready to protect the goal.